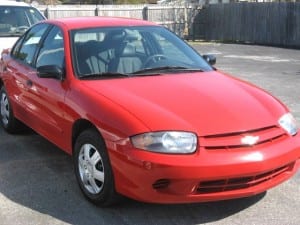 Our Naperville based towing company has jump started 1000’s of vehicles in plus all around Naperville Illinois. Today was one of those rare occasions that we bumped into a problem.

So this lady calls us from Willowbrook over at a Whole Foods that had a Chevy Cavalier that was in need of our Naperville tow company’s jump start service. We arrived to her location within an hour ready to help as usual. Popped the hood boom, no jump start terminals, plus the battery terminals were buried by the air cleaner assembly. Not a major problem by any means but somewhat unusual in our eyes, first time for everything. Nothing our trusty screwdriver can’t handle. Removed the air cleaner assembly cover, boom, jumped and ready to roll.

So what does this mean? Don’t leave home without our trusty screwdriver? Yes, for one. But for two even though we’ve done 1000’s of jump starts in Naperville land plus all over Chicago’s South to West suburbs, even we run into obstacles sometimes that we have to jump over even with a simple jump start service. When you need a tow service which includes jump starts, who are you going to call? Tow Recover Assist out of Naperville, IL, 24/7 jump start service you can count on. Reliable fast, & affordable jump starting service you can trust plus afford.

Jump Start Service
Sunday, October 30, 2016
★★★★★
“ I've used this service twice and have always had a great experience. They also have a shop that does service and repairs, etc. Based on my experience with the roadside aspect of their work, I know where I'll be taking my cars the next time they need work. Hands down, a great experience.”
- Matthew Hector
Jump Start No Problem But A Little More Work Than Usual
1835 High Grove Ln #103Naperville,IL
6302002731$70 - $250 Overall rating: ★★★★★ 5 based on 35 reviews.
5 1
Anonymous

Tow Recover Assist is your best aka #1 choice when in need of fast, cost effective towing and roadside assistance in Naperville plus anywhere else throughout the Chicago Metropolitan area. We offer towing plus roadside assistance A-Z including: jump starts, flat tire changes, car lock-outs, fuel delivery, mobile battery replacement and more. Call out team at 630-200-2731 now, later, 24-7. ... See MoreSee Less

Need a tow? We're your pro!www.TowRecoverAssist.com has been serving Naperville, Aurora, Plainfield, Oswego, Bolingbrook, Romeoville, Chicagoland Illinois plus beyond since 1995 and are looking forward to many more years to come. How may we be of assistance? Call our team at 630-200-2731 now! ... See MoreSee Less

Need a tow? We're your pro, for everything and anything towing in Naperville, Aurora, Bolingbrook, Plainfield, Chicago Metropolitan Area related. Our flatbed tow trucks and wrecker tow trucks have all your towing service near me, towing near you, towing throughout Chicagoland service needs covered.g.page/TowRecoverAssist#TowingInNaperville ... See MoreSee Less

Need a tow? We're your pro, for everything and anything towing in Naperville, Aurora, Bolingbrook, Plainfield, Chicago Metropolitan Area related. Our flatbed tow trucks and wrecker tow trucks have all...
View on Facebook
· Share